When You Can’t Take It With You – Grave Story 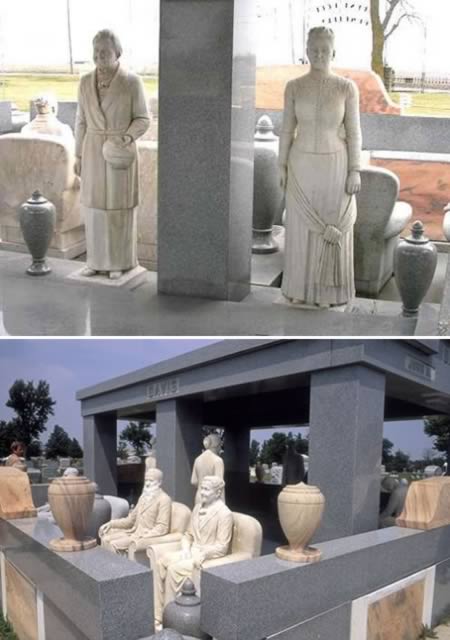 The most famous attraction in Hiawatha, Kansas is a 1930’s tomb sitting in Mount Hope Cemetery near the southeast edge of town. John Milburn Davis came to Hiawatha in 1879 at the age of 24. After a short time, he married Sarah Hart, the daughter of his employer. Her family did not approve. The Davises started their own farm, prospered and were married for 50 years. When Sarah died in 1930, the Davises were wealthy. Over the next 7 years, John Davis spent most of that wealth on Sarah’s grave.

The amount spent on the Davis Memorial has been estimated at anywhere between $100,000 and several times that amount. In any case, it was a large amount and included the signing over of the farm and mansion. This was during the Depression, when money was tight.

Several reasons are offered for the extravagance including great love or guilt, anger at Sarah’s family, and a desire that the Davis fortune be exhausted before John’s death.

The Davis Memorial grew by stages, which is bit of a shame. If it had been planned, it might have been built on a larger lot and made more attractive. The memorial began with a typical gravestone, but John worked with Horace England, a Hiawatha monument dealer, making the gravesite more and more elaborate. There are 11 life-size statues of John and Sarah Davis made of Italian marble, many stone urns and a marble canopy that is reported as weighing over 50 tons.