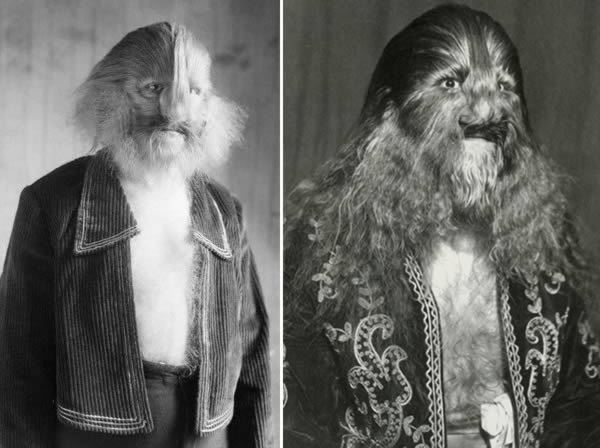 Stephan Bibrowski (1891–1932), better known as Lionel the Lion-Faced Man, was a famous sideshow performer. His whole body was covered with long hair that gave him the appearance of a lion; this was likely due to a rare condition called hypertrichosis.

Bibrowski was born in 1891 near Warsaw in Poland with one-inch hair covering his body. His mother blamed the condition on the mauling of his father by a lion, which she witnessed while pregnant with Stephan. She considered Stephan an abomination and gave him to a German impresario named Meyer when he was four. Meyer gave him his stage name and started exhibiting him around Europe.

By the time he was put on exhibit, Lionel’s hair had grown to eight inches (20 cm) on his face and hung about four inches (10 cm) everywhere else. His body was almost entirely covered with hair, the only exceptions being the palms of his hands and the soles of his feet. In 1901, Lionel traveled to the United States and started appearing with the Barnum & Bailey Circus.

By the late 1920s, Lionel abandoned his sideshow career and moved back to Germany. He was reported to have died in Berlin from a heart attack in 1932 at the age of forty-one.