Now here’s a shipwreck discovery that just might have you taking sides!

Not long ago, a group of American relic-hunters discovered “thousands of coins” and other artifacts from what’s believed to be the legendary British HMS Fantome – a War of 1812 gunboat carrying White House plunder. The ship, on its return to Canada after the ransacking of Washington, sank in Canadian waters off the coast of Nova Scotia in the early 1800s.

The discovery has set the stage for an international showdown between the three countries.

Having learned of the find, the British government has asked Canada to halt exploration at the Fantome site and insist that nothing should be taken from the area without permission from London. 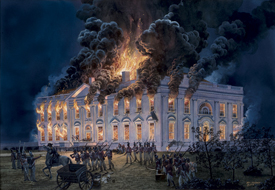 Tom Freeman’s painting of the August 24, 1814 burning of the White House by British troops during the War of 1812.

Canadian Heritage Officials have said little regarding their position on the matter other than they have received a letter, via federal officials in Ottawa, in which Britain argues that the, “Fantome remain the property of the British government and can’t be disturbed without their consent.” They have also described the British intervention as unprecedented and will need some time to study the “very complex” matter (lord knows how we like to study things to death); in the meantime, they’ve advised the U.S. salvager to seek British approval to continue its explorations.

And as you can imagine the Americans will have a whole different take on the way things should unfold – makes you wonder if they’re ready to assume the “finder’s keeper’s / loser’ weeper’s” approach and tell the Brits to butt out.

Given the fact that it’s a British wreck that lies in Canadian waters but is believed to hold gold and other treasures looted during a raid on the American White House in the early 1800s makes for some choppy and murky waters when it comes to determining jurisdictional rights.

I say to hell with both of them and just claim it as ours given the fact that it’s on our turf. I am sure you would agree!

Seeing that this naval operation (dating back to the 1812 War) provided the inspiration for the “bombs bursting in air” imagery of The Star-Spangled Banner I got a feeling the Americans might just have something to say about that!!!

Ah heck…if push comes to shove we can split in 90/10 with our friends south of the border and collectively tell the Brits to jolly well butt out!