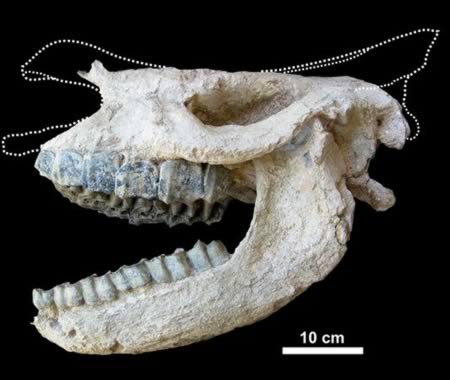 A rare fossil of a rhinoceros that roamed what is now Turkey reveals the tale of a sudden violent death—by volcano, 9.2 million years ago. The ancient rhino’s skull and jaw have a rough surface and brittle teeth. Paleontologist Pierre-Olivier Antoine of the University of Montpellier in France thinks that’s because volcanic rock fragments from the Cardak caldera pelted the rhino. A speeding river of ash and rock probably dismembered the animal and “baked” its skull at temperatures reaching 840ºF (450°C).

Just 2 percent of fossils are found in volcanic rock, because the heat usually incinerates organic matter. It’s even rarer to find a mammal fossil.

The skull and jaw of the rhino found in Cappadocia, central Turkey, weigh 66 pounds (30 kilograms). They are thought to have belonged to a large two-horned rhino, Ceratotherium neumayri, a species common in the Eastern Mediterranean Province during the late Miocene.