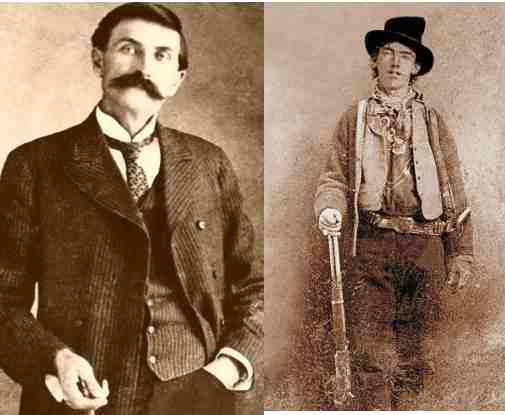 After William H. Bonney escaped from Lincoln County Jail in New Mexico while awaiting hanging for the murder of Sheriff William Brady, the record will tell you that Sheriff Pat Garrett tracked the outlaw, better known as Billy the Kid (above, right), to a residence in Fort Sumner where he shot and killed him. Questions abound, however, as to Garrett’s trustworthiness and the reasons for the prompt disposal of the victim’s body. Even one of his deputies present for the shooting said that the man Garrett shot was not the fugitive they had been looking for.

When a man going by the name Brushy Bill Roberts (above, left) surfaced in Texas in 1950 seeking pardon for the crimes of Billy the Kid, the media took notice. His case was eventually thrown out by the governor of New Mexico, who agreed to meet with him. The Governor did not believe Roberts was Billy the Kid. Roberts died a short time later, reportedly ashamed by the media circus that followed his confession. Jameson, however, is one of many convinced that Roberts was the real deal. “We started out trying to prove Roberts was lying,” he says of his investigation. One by one, though, all of Roberts’ claims were eventually verified. A statistical facial recognition analysis comparing Roberts to known images of The Kid suggested that the two men were actually one and the same. Jameson says that he’s challenged the so-called “traditionalist academics” that hold to Garrett’s official account of The Kid’s death to debate him on the subject, but none have accepted thus far.