When it comes to spinning tales no one does it quite like our friends in The East Coast of Canada. If you’re a lover of ghosts, goblins, disasters, triumphs, treasures and all things that go bump in the night I suggest that you lend an ear to some good old fashioned East Coast story telling that goes back centuries. One of our particular favorites concerns one of the most sought after relics of all time, The Ark of Covenant, the great ark mentioned in the both the Quran and Bible said to have been built by Moses to house the tablets with the inscribed Ten Commandments. At 2½ cubits in length (not sure what a cubit is but it sure sounds really big), 1½ in breadth and 1½ in height, this gold plated Ark (so the bible tells us) has been the subject of mystery, debate, speculation and fascination for more years than I can count on all of my fingers and toes (willing to throw my thumbs in as well). And what of this speculation you ask? Well, the big question amongst the treasure hunting, adventure seeking, Indian (wanna-be) Jones types out there is, where the heck is this coveted Ark? The answer, according to our East Coast friends (or at least some of ‘em) is right here in Canada on the tiny, 140-acre plot of land known as Oak Island (who said our baby country lacks exciting history?).

For centuries, amidst the swirl of rumors, thousands of people have spent absurd amounts of time and money seeking this holy grail of treasures on this unassuming Canadian island only to come away with catastrophic results – and why haven’t they found it you ask? Perhaps those East Coast friends of ours have hidden it really, really well. 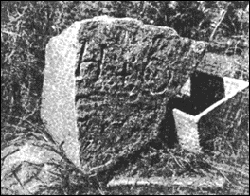 History has it that Nova Scotia has long been connected to pirate activities dating back to the 1600s. Over the years a number of historical treasures have been unearthed in this area, however in 1795 when word spread that a few local fellows found a circular depression roughly ten feet in diameter, it certainly caught the attention of treasure seekers from far and wide. As the local boys continued to dig they hit a layer of stone, passed a few layers of wooden planks, some coconut husks, some charcoal and then…..at a depth of 80 to 90 feet a stone tablet was discovered, which reportedly read, “Forty feet below – 2 million pounds are buried”. And with that they continued to dig and before long struck a solid block, which they believed to be a treasure chest. Returning the next day they discovered the pit to be filled with sixty feet of water! A booby trap? Perhaps. An act of God?  Maybe. A flood tunnel connected to the sea? Most likely! We’ll let you be the judge. Despite their efforts, little was found in the way of treasure; however years later an excavating team unearthed a series of stone boulders (arranged in a large cross formation) fueling further speculation that the Ark of Covenant could well be beneath their feet.

To this day Oak Island natives remain divided in their beliefs regarding the buried treasure. What is certain however is that since the initial discovery, 6 men have lost their lives. Despite the Oak Island pit – or “Money Pit” as the locals refer to it – having collapsed in on itself in 1860, modern day excavations continued well into the 20th century. Lack of evidence of the treasure, as well the absence of the original so called tablet (once presumed to be found) makes one wonder if there really is anything beneath the island, or is it simply just the makings of another great East Coast tale with a big hole in it – or should we say pit?