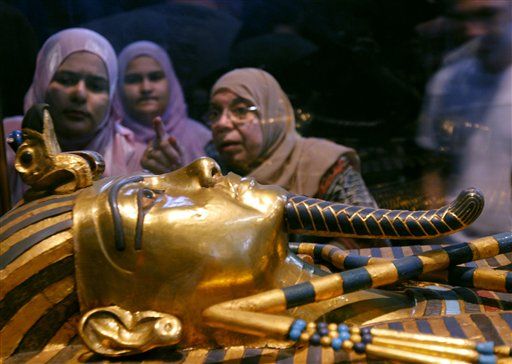 King Tutankhamun was mummified with his heart carved out, covered in black liquids, his penis kept erect—but why? Egyptologist Salima Ikram has an answer: that Tut was buried to resemble the underworld god Osiris as a way of battling a religious revolution that was gaining momentum in Egypt, LiveScience reports. Either Tut or his embalmers believed that his disguise would help fortify Egypt’s multiple-god religion and stamp out a new movement spearheaded by Akhenaten, a pharaoh who was probably Tutankhamun’s father. Akhenaten wanted Egyptians to worship Aten, the sun disc, and he promoted his crusade by desecrating images of other gods.

So embalmers made Tutankhamun look like Osiris: black oils and resins to recreate the dark skin, an erect penis to signify Osiris’ regenerative powers, and the carved-out heart because Osiris’ brother Seth had cut out and buried Osiris’ heart. Ikram admits it’s all theory, but it does bring the mystery of Tut’s burial full circle to Howard Carter, who discovered the mummy in 1922 and noted that “the king was indeed being shown as Osiris, more than was usual in royal burials.” (For more, see why Tut “spontaneously combusted” in his coffin.)