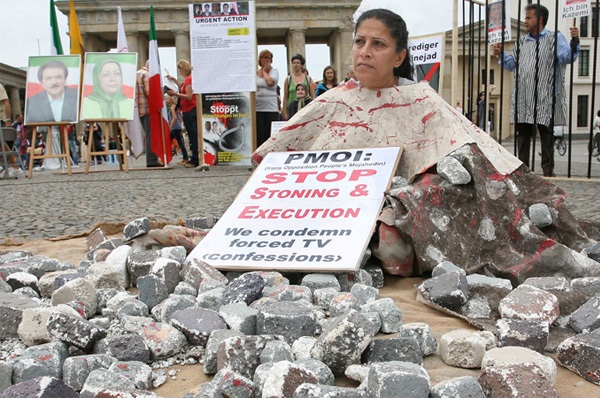 Upon browsing through the internet, one will find that the practice of human sacrifice by several different cultures or religious groups throughout the world to appease the gods, or God, flies in the face of religious idealism.

Unfortunately, in Iran the act of stoning is cloaked in religion since it specifically falls under the dictates of “God’s law” for the purpose of fulfilling or abiding by God’s will, which makes it a human sacrifice.

Stoning is a recognized form of execution under Iran’s penal code, which is based on Islamic Law. Considering that the Quran does not mention stoning as a prescribed method of execution, the practice finds its legality under Iran’s debatable interpretation of Sharia law, which is considered by Muslims to be God’s law.

So how is stoning carried out? After the convicted individual, who is a female in the vast majority of cases, is wrapped in a white shroud from head to toe and buried in a hole up to her breasts, rocks are then thrown at her head until she dies. Article 104 of Iran’s Penal Code specifically states that the appropriate stones for carrying out the killing “not be large enough to kill the person by one or two strikes; nor should they be so small that they could not be defined as stones.” According to reports, anywhere from ten to thirty minutes of pelting the victim’s head with rocks by a group of citizens usually accomplishes the goal.

One of the most famous cases is that of Sakineh Mohammedie Ashtiani, a forty-three-year-old mother of two who was convicted of adultery by an Iranian court and was sentenced to death by stoning in 2006. The international publicity, generated through her children, led to numerous diplomatic conflicts between Iran’s government and the heads of certain western governments. As a result, her execution has been stayed indefinitely.