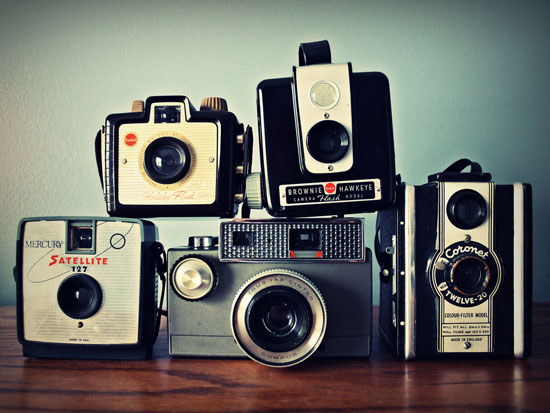 Types of Vintage Cameras For Beginners

Here is a brief description of eight types of vintage cameras that is needed for any beginner’s collection. For each camera described one manufacturer is suggested to help you in your search for these vintage beauties.

German company Exakta was the first company to bring a modern version of the SLR camera to market, doing so in 1936. An SLR camera from this pioneering manufacturer would make a fine addition to any beginner’s collection.

A twin – lens reflex ( TLR ) camera employs two lenses to help photographers capture a shot. One lens is used for previewing and the other is used for shooting the image. Like SLRs, TLRs employ a mirror for reflecting the image to the viewing lens (or viewfinder, in the case of the SLR).

Mass marketing of the TLR predated the SLR by about seven years, with the first TLRs coming to market in 1929. Rolleiflex was the first company to mass-market TLRs and numerous competitors subsequently imitated that company’s designs. Rolleiflex cameras are thus a good choice for beginning collectors who are looking to add a TLR to their collections.

The introduction of instant cameras to the market in 1948 represented a significant moment in the history of photography. It was the first time that a photographer could capture a photo and print it on the spot, thanks to the instant camera’s photo-capture and development technology being housed in the same small device. Although instant cameras were relatively limited in their photo-shooting features compared to other cameras of the time, consumers were thrilled to be able to develop their photos on the spot. This convenience was what introduced many people to photography.

Polaroid is the great innovator and marketer behind the instant camera, so much so that instant cameras are usually referred to as polaroids. The company suspended manufacturing of instant film cameras in 2008, so a Polaroid is practically a must for a beginner’s vintage camera collection.

Folding camera technology is one of the oldest camera technologies, dating back to the beginning of the 20th century. The main feature of this kind of camera is that the lens extends outward from a compacted position to give photographers both a portable and a functional camera. It uses pleated leather or cloth over a metal substructure to keep light out and looks like a rudimentary telephoto lens. When lying fully extended on its back with its lens pointing upwards, a folding camera would resemble a pyramid.

Folding cameras were popular until World War II and sales experienced a decline in the post-war period. German camera maker Zeiss Ikon produced many folding cameras that stand as good examples of the technology, thus making them a good choice for a vintage camera collection.

Box cameras represent camera technology that predates folding cameras. These cameras feature a cardboard or plastic box with a lens at one end and film at the other. Box cameras date back to the 1880s and the earliest ones were very straightforward with no adjustments to aperture or shutter speed possible. Minor adjustments were possible on later versions, but the technology was never very sophisticated when compared with that of current cameras.

The rudimentary nature of the box camera is precisely why it belongs in a vintage camera collection. Although simple, the box technology made this the first appealing camera to the wider public. It also created a design base for future consumer cameras. Kodak produced the first box cameras, and Brownie cameras are a prized item in many collectors’ camera collections.

A rangefinder is a camera that is specially designed for adjusting the focus within a scene. The viewfinder in this type of camera shows everything in focus since the viewfinder is basically just a window. The viewfinder also features a ghost image that can be lined up with the actual scene by turning a wheel on the camera. Focus is achieved when the ghost image and the scene appear as one and the same.

A rangefinder is particularly adept at focusing in low light, even more so than an SLR. Rangefinders are also generally smaller than SLRs. Leica is famous for its rangefinders, making this German brand a good choice for representing rangefinder cameras within a collection.

Subminiature cameras are known for being the first truly compact cameras. Whereas a folding camera can be extended from a compact setting, a subminiature camera is always small in the hands. It also uses film sizes that are smaller than 35mm, which is the standard size of film used in most film cameras. The introduction of 35mm film represented a downsizing itself and this film size was termed miniature film, hence the subminiature moniker for film smaller than 35mm and the cameras that use it.

Stereo cameras also represented an interesting development in camera technology, as these were the first cameras that were designed to help photographers produce three-dimensional photos. Stereo cameras use two lenses to capture two different images at the same time, only from slightly different angles. When the images are developed together on one print, there is increased depth of field, giving the picture a three-dimensional appearance to human eyes.